The last time I had an authentic North African couscous was over a decade ago, at a mosque in Paris. Actually, it was the first time I had had couscous, period. I can still remember how hard the gaminess of the lamb leg hit me when I held my face over the bowl and took a deep sniff – it was the smell of marrow, cinnamon and tomato, steamed into the tiny grains themselves, each one wholly independent from the others. It is one of very few meals in my life that I can remember with such great detail.

Many years have gone by, and many shameful spoonfuls of instant couscous have passed my lips. That stops today.

There are many, many steps involved in preparing a real couscous from its “raw” form. Lucky for us, the English-speaking genius of Mediterranean cooking, Clifford Wright, has laid them all out, clear as day, right here. In the interest of authenticity, I have followed his recipe very closely, changing only the proportions (since it would take me about a month to eat the 9 cups of couscous he suggests.).

The first step is finding the proper grains for an Algerian-style couscous. As Wright specifies, Algerians prefer fine couscous, as opposed to Tunisia or Morocco, who tend toward the medium grain, or a mix of both.

Damn, couscous, you fine as hell.

To promote fluffiness, another characteristic of Algerian Kaskasu bi’l-Lahm, we will be constantly working against the physics of the kitchen by gradually moistening the virgin grains of couscous and then painstakingly breaking apart lumps with our fingers. Food writer/scientist Harold McGee tells us that, with the addition of water, surface starches in pasta products (like couscous, which is made of semolina) take in moisture and “gelate”, causing viscosity breakdown and stickiness. Standing over a table and devotedly fighting this reaction will make your back hurt, but will also make your couscous fluffy, and your hands well-exfoliated and Palmolive soft.

After their initial moistening, the grains are left to dry for a while while we start the stew. 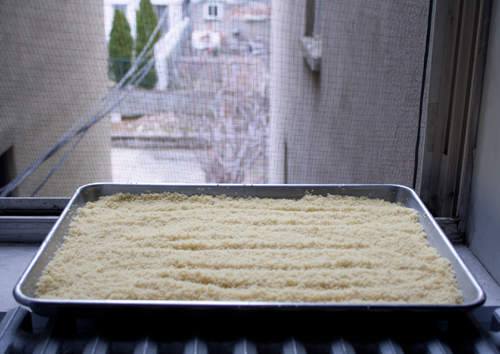 I probably should have cleaned my window.

Once the lamb has been browned, the veggies, chickpeas and spices have been added and the stew is bubbling merrily, the couscous, which has recently been lightly coated with extra-virgin olive oil (using your fingertips only… yeah, seriously), is placed over the stew for its first steaming.

Now, if you’ve read my manifesto, you’ll recall that one of my goals was to try to avoid using any specialized equipment that wouldn’t be found in any normal kitchen. The couscoussière, which is basically a double-boiler/steamer that is the traditional implement for preparing couscous, would certainly fall under this category. But lo! How to make an authentic couscous nonetheless? Hack it.

Clifford Wright suggests using, in the absence of a couscoussière, a stockpot with a metal colander suspended over it, glued together with a qufila, or dough-seal, to prevent loss of steam. 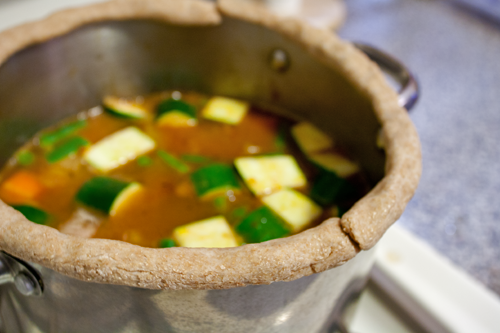 Sealed up and steaming

I put a double-layer of cheesecloth over the colander to keep the grains from falling into the stew, as well as to aid in transporting them to my drying tray and back over the steam. This helped a lot, since the couscous needs to be steamed twice (even three times, some say), with a break in between to once again fluff the grains.

After the last steaming, I gave the couscous a quick brush of butter and a sprinkle of cinnamon, broke up any remaining lumps with my hands (somehow, in defiance of me, there were a couple), and mounded the fragrant grains in a big bowl. I made a little well in the middle, filled it with meat and veggies, and then ladled in a good amount of broth. 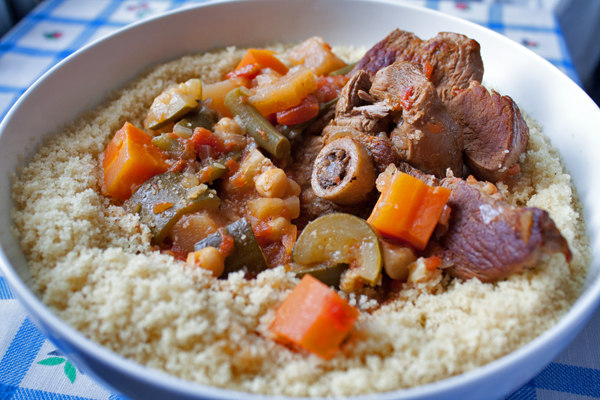 Like Proust’s fabled madeleine, this stew bridged time and space. Only this was much, much better than some stupid cookie, and almost as good as what I had at the mosque.

(NB: The more erudite reader may note the lack of harissa in this dish. Despite its ubiquity in North African cuisine, Tunisia is the largest exporter of harissa in the world, and as such harissa will be represented when we get to the letter “T” [in about two years…].)

After dinner, I whipped up a quick dessert – M’Halbi, a rice pudding made with ground basmati, cinnamon and orange blossom water (which smells pretty much like my grandma’s old perfume from the 50’s.). The recipe (adjusted by me, of course) is courtesy of Kamel El Harrachi, an Algerian singer, oud player and, apparently, dessert enthusiast.

Now you go:
Kaskasu bi’l-Lamh
adapted from a recipe by Clifford A. Wright

Spread the couscous in a big pan or dish, and begin sprinkling the salted water over the grains, a little at a time. Using your fingertips, work the grains together to distribute the moisture while simultaneously breaking up any clumps. All the grains should be damp, but not wet.

Spread couscous out in pan and allow to dry for 1-2 hours. Once dry, repeat the moistening process using 1/4 cup of extra-virgin olive oil, until all grains are lightly coated and glistening. Lay a double-layer of cheesecloth inside a metal colander or sieve. Transfer couscous to colander and set aside.

In a pot (that is narrow enough to eventually support the colander), heat the remaining 1/4 cup of olive oil and sear the lamb on all sides until well browned. Remove from pan and set aside, reserving oil. In the remaining oil, brown the onions, then add the garlic, tomatoes, drained chickpeas, seared lamb, hot pepper, salt and pepper with enough cold water to cover and bring to a boil. Once boiling, add the turnip. Reduce heat to simmer. After 20 minutes, add the carrot. After 20 more minutes, add the green beans and zucchini.

(At this point, be sure there is enough water in the pot to just arrive at the lowest point that the colander will reach when placed over the pot – once you seal with the qufila, you won’t be able to see how much is left until the couscous is done.)

Seal the couscous-filled colander and pot together using the qufila (mix 1/2 cup flour with enough water to make a sturdy dough, then roll it out into a long rope). Steam couscous, UNCOVERED (I know, right? But it works, trust me.), for about 45 minutes, then, with the cheesecloth, remove from colander and spread out in the large pan. Once cool enough to touch, rub grains together between your hands to break up any clumps. Sprinkle with cinnamon, mix well and return to the cheesecloth-lined colander. Steam for 45 more minutes, or until pleasantly tender.

One last time, remove couscous from colander and spread out in pan. Drizzle with butter, rub with hands again to break up clumps, and mound in a large bowl. At this point, you can break the seal and discard the qufila. Have each person mound 3 ladles of couscous in their bowl, followed by meat, veggies and broth to their liking. Serve with harissa, if desired.

Combine milk, sugar, rice powder and orange blossom water in a saucepan. Mix well, heat to simmer while whisking constantly. Cook gently until the mixture thickens and coats the back of a spoon.

McGee, Harold. On Food and Cooking: The Science and Lore of the Kitchen. Scribner: New York, 2004.

http://www.cuisine-algerienne.com/ (There are WAY more sources of Algerian recipes in French, FYI)

Leave a Reply to B Nice Cancel reply