The Argentine Republic, all of it, from its modern cities to its fertile, rugged pampas, was home to one of my favorite authors (and my dissertation inspiration), Jorge Luis Borges. Unfortunately, for all of his prolific erudition, he never once published a recipe for asado or chimichurri. I suppose this is for the best, since it would probably have required ingredients that haven’t existed in 400 years, or could only be found at the summit of a made-up mountain or in the flooded basement of the only remaining Zoroastrian convent in the Azores.

Besides Borges, Argentina is known for both the quality of its beef and that selfsame beef’s painstaking and reverent preparation. You’ve probably seen one of those “weird foods” shows on TV, featuring Argentina’s parrillas and the unbelievable variety of animal parts they hold, all roasting cheerily over crackling wooden embers. For several reasons, ranging from the tininess of my claustrophobia-inducing Queens apartment to my lack of a backyard or any means of burning wood without doing time for arson, this classic Argentine method of preparing beef was depressingly out of the range of my possibilities.

Inconsolable, I spent a lot of time reading up on asado recipes and Argentine cooking blogs, and one in particular soothed my firewood-stoked guilt. Written by an American who has spent a long time living in Tierra del Fuego, one thoughtful (albeit vitriolic) post made me feel a lot better about using the only means available to me for grilling meat – the cast iron grill pan. As it turns out, Argentine families don’t spend nine hours every day slow-roasting steak, sausages and kidneys. Who knew?

Now, source of heat aside, it’s crucially important to start with quality meat, from a trustworthy butcher who is willing to listen to you and follow directions. This is harder than it seems around here – many times the issue is simply a language barrier, but at other moments the butcher is helping six customers at once and simply will not look up from his work to engage any further than simply confirming which animal, which cut and the weight. One aggressive Saturday morning, I managed to get myself a 4-inch thick, well-trimmed filet mignon (or lomo, “tenderloin”), along with some really snappy, fragrant chorizo from Despaña.

I butterflied the filet against its grain into two halves, which shortened the muscle fibers, exposed more connective tissue and created more surface area for even cooking (= tenderness). 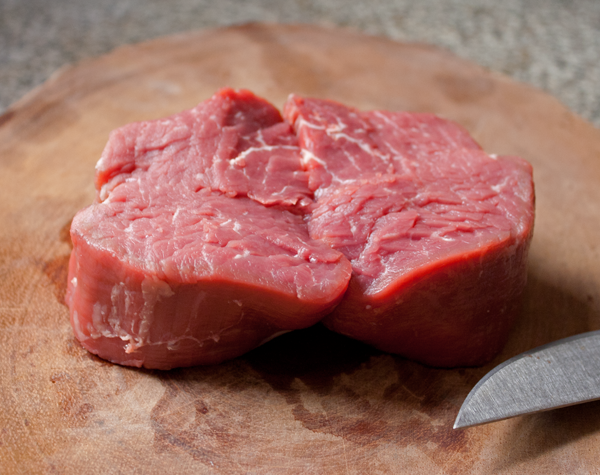 I put the grill pan on the fire to heat up, took the batteries out of my smoke alarm and got started on the typical condiment for asado: chimichurri. Basic chimichurri just includes garlic, parsley and oil – I decided to follow the recipe on the aforementioned asado blog, which spruced it up with a little vinegar and a pinch of oregano.

The grill pan was hot as Hades now, so I carefully positioned the sausages and steaks, rotating the beef 90-degrees on each side after a couple of minutes and flipping only once. (I like my beef rare and personally feel that, should a person order their beef well-done, they instead be served a revolver and one bullet.) If you have trouble telling when a steak is cooked to your desired temperature, an old trick is: with your index finger, poke the flesh beneath the thumb on your other hand. Then, poke the steak. Relaxed thumb = rare, flexed hand = medium rare, flexed and poke center of palm = medium. Anything past that, just burn it.

Now, for dessert: Dulce de leche is one of those recipes I would classify as “simple, but not easy.” I’ve made water-based caramel before, which requires a lot of whisking and movement in order to ensure that it doesn’t burn and ruin the pan, and this is not really any different. When I first read the recipe (cited below), I noticed that it said “cook on medium-low heat for three hours”. There was no mention of stirring, and so, gleefully ignorant, I planned to set the stove to the correct temperature, fire up my Xbox and frag some n00bs on Call of Duty for approximately three hours. What actually happened involved tired feet, a sore elbow and a couple of burns on my hands. Making dulce de leche from scratch involves not only consistent whisking, but also a high-wire act of temperature control – too low, and it will take six hours to caramelize; too high, and it foams over and burns all over your stove, obliging you to chip away at crystallized, blackened sugar with a razor for ninety minutes. (You may note that my dulce is a darker mahogany than others you may have seen – early on in the cooking process, it indeed foamed over. Since the light-colored milk solids had, at that point, floated to the top, a lot was lost in the crannies of my stove, leading to a darker colored end product. The flavor was luckily still spot-on, though a little less creamy than I had hoped.)

This was a pretty killer meal. The bloody, yielding steak and the pimentón-tinged chorizo both played fittingly against the tart brightness of the chimichurri, and the dulce de leche, draped over some vanilla ice-cream, was warm and smooth, with a balanced, toasty sweetness.

OK, I’m off to get my cholesterol checked.

(NB: I’m gonna go out on a limb and guess that you already know the recipe for grilling steak [meat + heat = grilling])

Add parsley and garlic to food processor and hit the pulse button a few times to mince. Add remaining ingredients and pulse some more. Slowly pour oil through the chute, while pulsing. Continue until ingredients are well-mixed but the oil is not clouded.

Dulce de leche
borrowed from the blog From Argentina with Love

Bring the milk to a boil in a heavy-bottomed sauce pan. Add all other ingredients, being sure to stir the sugar with a whisk until it’s completely dissolved. Cook over medium-low heat until it turns into caramel, about 2-3 hours. It should have a rich tan or brown color and smooth texture when done. Consistency is a matter of taste-some like theirs runnier than others, but test it by spooning some onto the center of a plate. If it stays without running and making a puddle, it’s ready.