Commonwealth of the Bahamas

I really wished I were in the Bahamas while I prepared this meal. The bestial heat and suffocating humidity of New York City made me hunger for what I imagined to be the fresh salt breezes and endless seascapes of these well-traveled islands. As I worked, I pined away: instead of smelling the redolent pee cooking off the sidewalks, I could be breathing in the perfumed vapors of steaming fish and fresh coconut water; rather than that homeless dude’s irate caterwauling, I could be listening to the ruckus of oystercatchers and the crashing of azure waves. Oh well.

I haven’t been to the Bahamas before, but on a trip to Key West, Florida I ate a metric crapload of the “cracked” conch that is so popular across the West Indies. This mollusk – a real monster when you get up close to it – has a flavor and odor that is sweeter than that of a clam or mussel, and has way more chew than an oyster (which is actually one of few sea creatures I really don’t have a taste for). This makes sense, since it’s really a snail. In fact, the flesh is so tough and dense that it either needs to be stewed to absolute hell, or violently tenderized (“cracked”) before being deep fried.

You start with this thing, which was found in Chinatown at the astounding price of $10 per pound:

As you can see, there are a lot of… parts. All of it is technically edible, but “technically” isn’t really going to get you to “delicious”. I mean, “technically” grass and tree bark and dog hair is “edible”, too.

The next step, clearly, is trimming off anything that isn’t white flesh, and then butterflying/flattening the main muscle of the gastropod to make a sort of filet.

Now here’s the part that counts – using a meat mallet, or rolling pin, or heavy, wieldy pot, or the Fender of a god-damned Trans-Am if you have to, go to town on the conch. I mean really show it the business. Take that unfocused, generalized anger, that angst over a stalled career, that roiling fear of the unknown and just take it all out on the conch. The madder you get the more tender it will turn out. Send it to hell.

Ok, deep breath. Put the traumatized conch meat into a baggie with some lemon juice. Let it sit in the fridge. Look in the mirror and try to be OK with what you’ve just done.

Bahamian hot sauce is incredible – it combines three of my top five ingredients (garlic, hot peppers, and vinegar) and basically just purees them with a little oil to lube it all up. I used habaneros, which are native to the Bahamas and are curiously called “goat peppers”. 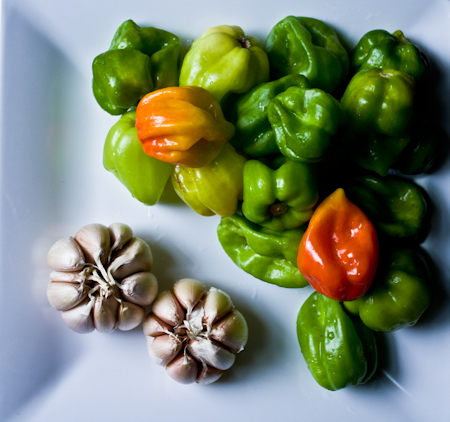 After prepping the customary Bahamian starch of peas & rice (NOT rice & peas… at least not in this part of the Indies), I gave the conch meat a series of dredges in flour, an egg/evaporated milk mixture, and then more flour (I added some panko for crunch). I fried it in corn oil (also a staple in the Bahamas) until golden and served myself a big plate with a dollop of that fresh hot sauce. Through my wrath, the conch had become as tender as a fried chicken filet, and its previously overwhelming oceanic scent had been tempered by the heat and lemon juice. The peas & rice, made with canned pigeon peas (or gandules, which are a bit more hearty than the green peas to which continental Americans are more accustomed), also played a willingly neutral background for the fireworks happening on the rest of the plate.

Now, after all the garlic in that hot sauce I knew I wasn’t going to get anyone to talk to me. So, I decided to stay inside and cook a little dessert – guava duff.

If you remember my post from Antigua, the idea of a sweet, steamed quickbread should not seem so strange to you, especially in the Caribbean. Like Antigua’s ducana, Bahamian guava duff is steamed… sort of.

It all starts with guava pulp. Somehow, for the first time ever, my grocery store did not have fresh guavas, despite carrying them immediately before (note: and after) I made this dish. Luckily, they did carry frozen guava pulp, which still smelled and tasted great and had no strange additives.

Then you have to make a soft, sugary, eggy dough and smear it out on a piece of aluminum foil. The guava pulp, in turn, gets smeared onto the dough and then the whole thing is rolled up into a sort of jelly-roll cylinder. The only things left to do are sealing the foil, boiling the cylinder in a big pot for an hour, and, while that steams, prepping the butter and whipped-egg-white quasi-meringue that goes on top of the hot, sweet finished product. As the butter in the emulsion melts, the sauce slips into all the crannies and softens up the dense, cookie-like dough. Really magnificent. 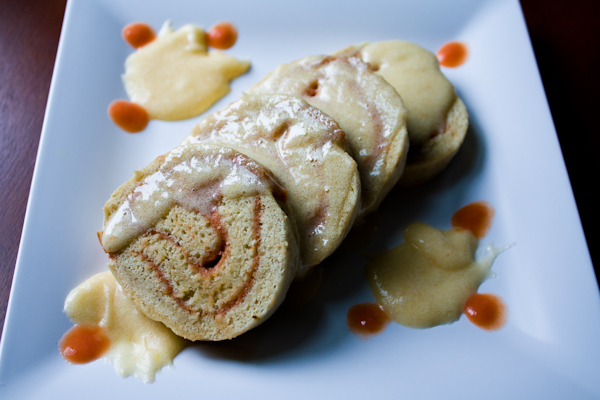 I had a lot of leftovers from this entry, which was fortunate. Carrying around Tupperware containers full of fried conch and guava duff made me feel like I was in a fragrant, peaceful, delicious place. Even in the smelliest subway car.

Of the slowest train.

On the hottest day of the year.

Set up an assembly line with one bowl for flour, another for the egg mixture, and a third for the panko.

Lightly flour conch in first bowl, then dip into egg mixture, then roll in panko (or flour again, if not using panko). Immediately drop into hot oil and fry until golden and crispy.

Render bacon until crisp. Remove from heat, reserving fat. Crumble and set aside.

Cook on low heat for app. 20 minutes or until water is fully absorbed and rice is cooked. Add crumbled bacon and serve.

Pulse garlic and peppers in a food processor until finely minced. Add vinegar and pulse a few more times to incorporate. Store in a jar or container with a layer of olive oil on top.

Whisk butter and sugar in a large bowl until smooth. Add eggs & spices. Whisk well. Sift in flour and baking powder, mix well and turn stiff dough out onto an extra-large sheet of floured aluminum foil. Flour a rolling pin and roll out dough to make a sheet that is 1″ smaller on all sides than the aluminum foil sheet. Smear 1/2 cup guava pulp (more if desired) all over dough sheet, then CAREFULLY (dude. seriously. CAREFULLY.) roll up the dough into a cylinder, making a jelly-roll shape. Be extremely careful that the guava pulp does not all squirt out the sides. Immediately fold up edges of aluminum foil and seal both the top and sides, retaining the cylindrical shape. Roll out another sheet of aluminum foil, place the cylinder on it and again, roll up and seal all edges. These two layers will prevent any water from leaking in during cooking.

Place the cylinder in boiling water and boil for 1 1/2 hours, or until very firm.

Remove from water, drain, let cool slightly, then unwrap on a cutting board. Cut into thick, round slices and serve doused with butter-egg sauce and more guava pulp, if desired.

Whisk butter and sugar until smooth. Add egg yolk, vanilla and guava pulp and mix well. In a separate bowl, furiously whisk the egg white with all of your spite, malice and will to dominate. When it forms sturdy mountain peaks when the whisk is removed, fold it GENTLY into the sugar/butter mixture.

6 thoughts on “Commonwealth of the Bahamas”